The world, contrary to what television and romanticized tales of a past that never was, has always been a dangerous place.

Luckily we live in a country that thrives on the rule of law and values the pursuit of happiness and its citizen’s right to liberty and personal freedoms.

But that doesn’t mean that we’re always going to be safe, as there will always be an element of society that believes that it is entitled to do what it wants, that preys on those it thinks are weaker than it is and believes that the system of governance that we live under and abide by doesn’t apply to it.

The thought that maybe that small percentage of the population might decide to pay our homes or the business that we’ve worked hard to build from the ground up a visit while we’re not there, is enough to make your blood run cold and your heart beat faster with fear.

Just knowing that it’s a possibility is enough to keep most of us awake at night thinking about what could happen, and how, if at all, we can minimize any of the potential risks that an uninvited guest could pose to our families, homes, and business.

How can you solve a problem that’s as old as society is?

While there isn’t an all-encompassing answer, there is a simple and straightforward way to increase the level of security around your home and business, that can help to protect your family and property from any unwanted attention.

All you need to do is install a PoE (power over ethernet) security camera system. That’s where we come in.

We were worried about the same things that you were, so before we fitted our system, we spent weeks looking for the most effective, cost-efficient, and easy-to-use PoE security system and found what we believe are the best options for any business and homeowner.

And because we want you to feel as safe and secure as we do, and we want to make sure that you can sleep easily at night, we’re going to tell you all about them.

The world might be a scary place, but with one of these PoE systems in place, you’ll never have to be frightened about who might be crossing your threshold ever again. 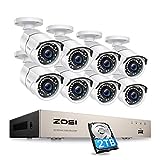 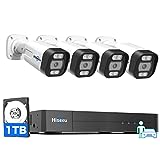 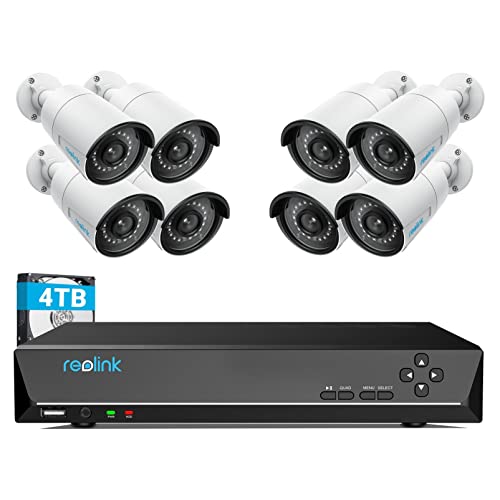 When we started looking for PoE camera systems, one name came up over and over again, Reolink.

With over a decade of experience in the home security industry, Reolink has, in their own words, “spent years looking for the perfect way to keep your home and business safe”, and with hundreds of thousands of satisfied and happy customers subscribing to their way of doing things, they must be doing something right.

It’s a simple plug-and-play system, and once the cameras are in place, all you need to do is plug them straight into the NVR (Network Video Recorder), and the system will do the rest.

Able to record up to sixteen different channels (one per camera) at the same time.

The 3TB (Terrabyte) hard drive, which can easily be expanded to 12TB, can and will record anything going on outside your property during the day and night, that’ll help to give the peace of mind that’s been missing from your life.

That’s not all, as the Reolink app will let you see what the cameras see in real-time wherever you are in the world, by connecting your smartphone, laptop, or tablet to your home PoE system.

It doesn’t matter where you are, or where you go, with Reolink on your side, your property will always be safe. 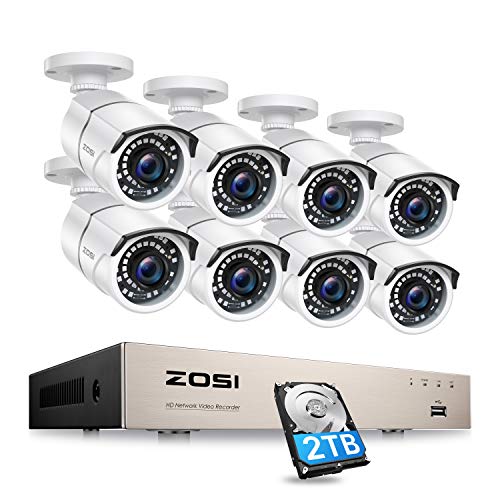 Reputation is everything for security-centric companies and Zosi has established itself as one of the world’s leading suppliers of home-based, and friendly camera systems during the fourteen years that they’ve been a part of the industry.

They might not be one of the biggest dogs in the security yard, but they are one of the most reliable.

Able to record up to eight channels at once, the Zosi’s DVR (Digital Video Recorder) has a 2TB hard drive that records everything that the (eight) camera’s film.

As the DVR uses compression ratio technology, it exponentially increases the amount of footage that it can capture and record, without losing any image definition.

And as the system is supplied with over three hundred feet of ethernet cable, the DVR can be safely located in any room in your home and will transmit anything that the cameras film directly to any of your smart devices via the Zosi app.  Home security doesn’t need to cost an arm and a leg, it just needs to be effective. 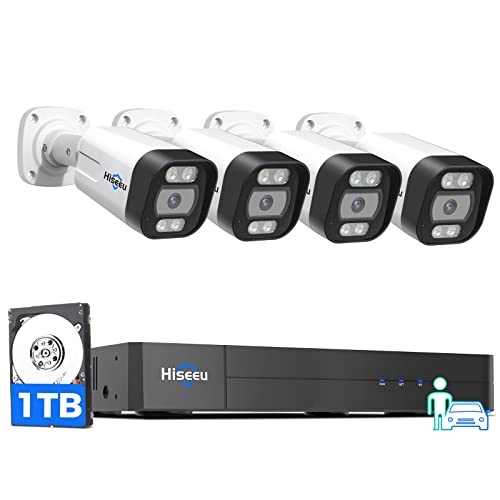 Don’t worry, we hadn’t heard of Hiseeu either before we began our search for the PoE camera system, but a friend of ours mentioned them to us and so we thought we’d check them out.

And we were glad we did, as this Chinese firm specializes in cost-effective solutions to home security problems.

Featuring a two-way audio system (which allows direct communication with whoever is caught on camera)  and face detection software, the Hiseeu also uses video compression technology to effectively double the amount of footage that the hard drive can record with no loss of picture or image quality.

And as it can record eight channels at once, you can double the number of cameras that the system is supplied with and the NVR will still be able to record up to thirty days worth of footage before it needs to be backed up, or wiped.

And Hiseeu has also made sure that their NVR can send you the recorded, or real-time footage where you are, as it’ll connect to your smart device via the Hiseeu app.

It’s an affordable way to keep your home safe and secure, 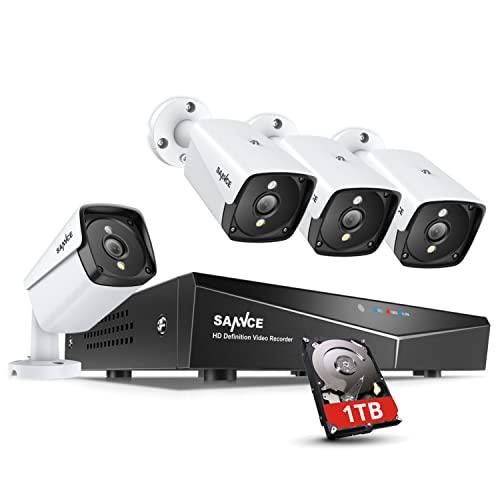 One of the biggest factors that everyone worries about when they’re considering installing a camera system is the economic one.

How much it’ll cost can make the difference between deciding to bite the bullet and do what’s right or rolling the dice and letting fate take charge of your home security.

Sannce makes that choice easy and takes fate out of the equation with their insanely affordable PoE camera system.

Completely weatherproofed, the NVR can record from all four cameras at once and thanks to its motion trigger feature, the Sannce will also maximize the available space on its 1TB hard drive by only recording when it needs to.

That means you can record up to three weeks’ worth of footage, and see who paid you a visit while you were away on vacation.

But you don’t have to wait until you get back to see who came calling, as the Sannce allows you to tune into what’s going on at home while you’re away thanks to the app that’s freely available to all of its customers.

All you need to do is connect the NVR to the internet and you can see what’s going on around your home, twenty-four hours a day, seven days a week no matter where you are in the world. 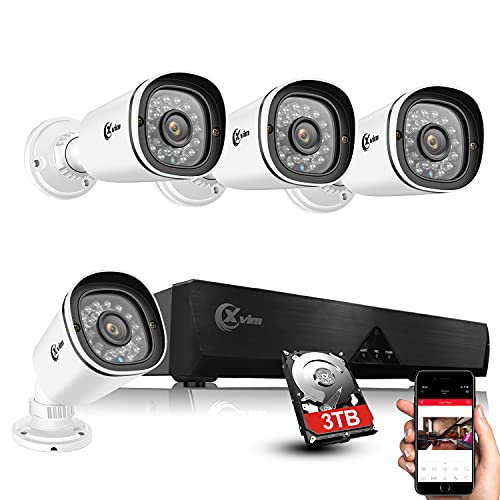 We know, it seems like we’re focusing on the cheapest solutions to an ever-present problem, but that’s because we firmly believe that home security doesn’t have to be an expensive business and should be something that everyone can afford.

And XVIM is another firm that believes the same thing that we do. That making your home a little more secure shouldn’t have a lasting impact on your bank balance.

With eight-channel, motion-triggered recording and a 3TB hard drive as standard, the XVIM is the ideal home security solution for anyone who might be going out of town for a little longer than they thought they would.

The NVR’s video compression technology can also effectively double the amount of footage that it can record with no picture degradation or loss of image quality.

And as long as you connect the NVR to your WiFi, you’ll be able to see what’s going on at home (or more accurately, what’s going on outside your home) on your phone while you’re away.

Oh, and location isn’t a problem with the XVIM, as the NVR can be placed anywhere within three hundred and thirty feet of the four cameras.

Wherever you want the hard drive to live in your home, is your choice.

What Is A PoE Security Camera System?

A PoE, or power over ethernet, camera security system is a home-based all-in-one security camera and recording system in which the cameras are powered by the same ethernet cable that they use to send the footage that they film to the recorder.

They can be connected to the internet, which allows a homeowner to watch any of the footage that they recorded, or the real-time footage being filmed, from anywhere in the world on their smartphones.

PoE camera systems are an affordable and effective solution for anyone worried about home security.

Which PoE Camera Security System Is The Right One For Me?

We’re going to beat around the bush and waste any more of your time, and we’re going to get straight to the point.

When it comes to home security, you can’t afford to compromise, and even though all of the systems on our list will do a great job of helping you to protect your home, the one that we’d recommend you install is the Reolink.

It is, after all, the one that we chose to keep our home safe and secure.