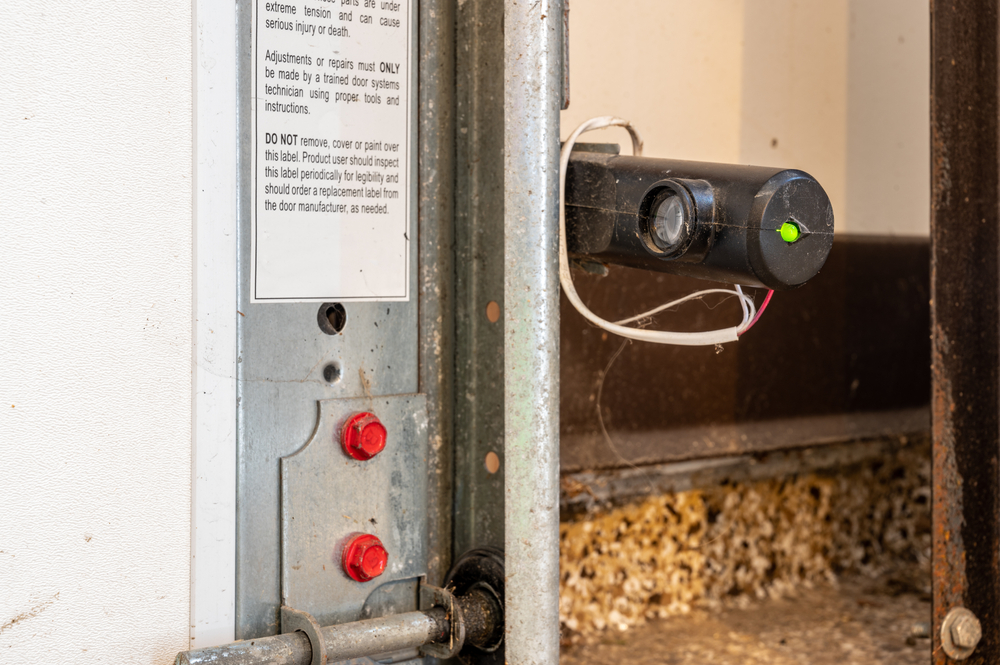 A powerful garage door opener is definitely an essential piece of gear. The higher the horsepower, the less the motor struggles, and the quieter it performs, keeping the neighbors at bay when you need to hit the road early.

However, the more powerful machinery gets, the more dangerous it becomes, and garage doors are no exception — they’re basically slow, blunt guillotines.

Over the years, there have been numerous fatalities, injuries, and instances of property damage due to the closing of garage doors on people, pets, and objects.

This was happening so frequently that, in 1993, the federal government stipulated that all new garage door openers must feature some form of safety measure that reverses the motion of the door in the presence of an obstacle.

This safety requirement was first met in the form of a mechanical pressure sensor. If it registered the door making any significant contact with something, the motor kicked into reverse, and disaster was averted.

These days, photoelectric devices with infrared beams are used instead, as they’re more reliable, less fault-prone, and prevent any contact between a garage door and an obstacle, saving a fair few vehicles from scratches and dings.

Yet, despite their enhanced functionality, the intangible aspect of these little life-saving mechanisms can inspire doubt, but we find that understanding how they work can help us to feel much safer in our garages.

Where Are Infrared Garage Door Sensors?

These infrared sensors should be aligned on either side of your garage door, roughly 6 inches up from the ground. 6 inches is considered a good placement height, as very little will bypass the beam. Cats, dogs, children will all interrupt the beam if they cross the threshold of your garage.

You can set your sensors lower if you have a kitten, puppy, turtle, or rabbit, but they should never be set so low that a person could avoid them by accident with their natural step.

What Do Garage Door Sensors Do?

Infrared garage door sensors do pretty much the same thing as the mechanical sensors of old. They register when there’s an obstacle in the path of your closing garage door, and reverse the motor, so the door travels up rather than down.

How Do Garage Door Sensors Work?

Garage door sensors, also known as photo eyes, are made up of two discrete parts, a sender and a receiver.

The sender beams an infrared “tripwire” across the threshold of the garage, directly into the receiver. When something intercepts this infrared wire, the sensors send a message to the motor of the garage door opener, instructing it to open, rather than close the door.

As the sender is perpetually sending this infrared message across the room, they normally have a solid green or amber light indicating they are powered, and the invisible infrared string is set. If the light on the sender goes out, it means it’s not turned on. This could be due to a fault or a problem with the power draw.

The light on the receiver will also blink or turn off when something or someone has interrupted the infrared beam, instructing you that the garage door has been set into reverse for a reason.

As these units are trying to tell you different things, it’s important to remember which is which.

What Happens When The Infrared Beam Is Unaligned With The Receiver Or The Photo Eyes Are Dirty?

So, what happens if the infrared beam isn’t reaching the receiver? Does that mean we won’t be protected? Well, this is quite a common occurrence. These sensors protrude a little, so we’re bound to knock them from time to time, altering the path of the infrared beam.

As they’re pretty close to the garage floor, they can also get pretty dirty, especially if you use your garage for DIY purposes. Spiders will leave cobwebs over the sensor, then the cobwebs will catch all the debris from your projects, and eventually, the beam will be obscured at one end or the other.

The good news is that manufacturers have addressed this issue, so there’s no need to worry. When the beam fails to reach its destination, we’re safer than ever, as our garage door simply won’t move.

This sudden halt doesn’t just apply to a garage door in motion, but even when it’s stationary, and you press the button to open or close it. The opener simply will not register your request until you realign the sender and receiver.

This auto shut-off is an essential part of garage door sensor functionality, and although it can be pretty irritating, say, if you’re late for work, it keeps us, those around us, and our cars safe.

Some people try to cheat the sensor system by placing them up high, close to the ceiling rather than the floor, but this is an absolutely terrible idea. You’re only putting yourself and your cohabitants in danger, besides, up high or down low, you’ll still be battling against cobwebs and debris.

Should your sensors fall out of line, you can usually adjust their positioning by loosening the rear wing nut. If there isn’t a wing nut, you may just have to physically bend the mounting bracket back into place.

Despite being more reliable than their mechanical predecessors, photoelectric sensors can run faults from time to time. It’s usually something to do with their logic board, an internal IC that facilitates interactions between their components.

If you can’t seem to get your garage door sensors to work, it might be time for a replacement. We’d recommend sourcing them from your garage door opener manufacturer to ensure compatibility, but if that’s not possible, why not try a more universal set like these Chamberlain Group G801CB-P sensors.

How Do Garage Door Sensors Work? Summing Up

Well, without getting overly technical about logic boards and electronics, we think that about covers all bases.

Garage door sensors systems are made up of senders and receivers. The sender threads an infrared beam from one side of the garage door to the other, where it’s registered by the receiver.

When someone or something intercepts the infrared beam, a message is instantly sent to the garage door opener, informing it that it should reverse the motion of the garage door, and that’s all there is to it!